Wednesday 20th April saw a chilly start to the morning, but the cloud started to separate, the ground warmed up and the private gliders came out en-masse for some good soaring conditions (atleast until I went up a bit too late in the day..). LPM is still on its back, but JKW was in active use and some flew FUY solo. Chris demonstrated the art of delegation in running the LPC (from the seated position), although she was caught temporarily off guard hooking on JKW (evidence attached).  The great news of the day was Mike sending Roland solo – apparently his 13th solo having flown multiple fixed wing and helicopters in his career in the AAC – the last time however was in the early 1990’s, so a big congrats to Roland, and no doubt he will be onto LPM before too long to make it 14! Now for Rowan to catch up with his Dad!

Looking forward to the Flying Week next week! 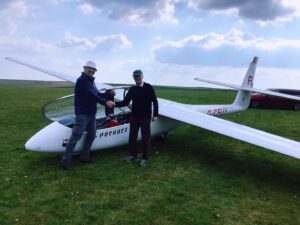 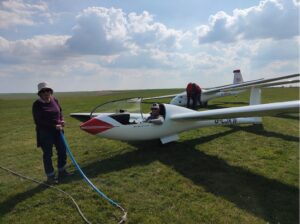