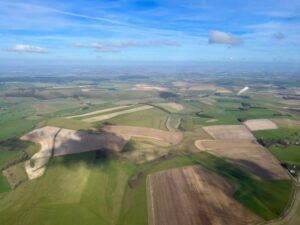 I wasn’t expecting much of Saturday as the wind was forecast 15-20 kts southerly with gusts to 26 kts, but there were a good number of thermal soaring flights. I saw a cloudbase in LPM of over 2500ft above site, but what was most notable was the streeting. If this is winter, let’s hope the Spring and Summer are as good.

And it was good to see Bath Uni again after the difficulties of covid in the last couple of seasons.

A lovely day’s flying. 33 flights today, with Steve Lambourne achieving the longest flight of 18 minutes in LPM. Sitting in the front seat of GAM doing instructor training we had a thermal climb of over a knot up to 1800ft, (thank you Dan) and a winch launch to 2100ft, (thank you Graham) which is the best ever I have seen at The Park. And the wind was only 20kts.

All very pleasant for the time of year. 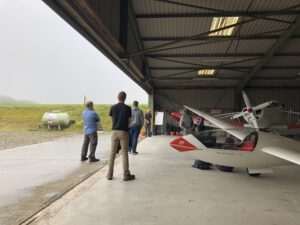 Today on the Flying Week the drizzle and low cloud plus the need for social distancing, didn’t stop Mike Jenks giving an excellent interactive briefing on a variety of important subjects from launch failures to stalling and spinning. Don’t let the weather put you off attending .

Dennis enthralled us with his experiences of stalling and spinning Hunters, Gnats, Hawks, Venoms and many other types at impossible g loadings and attitudes. +6 G spin anyone? 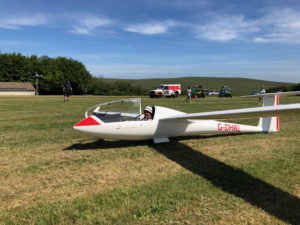 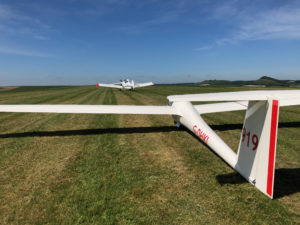 There will be solo flying by aerotow only on Wednesday 20th for those who have arranged flying with the CFI. We then plan to have a more normal operation from Friday, but solo only unless with a member of the same household.

I came across this unusual image of Bournemouth airport yesterday. If you are reading this from an email you will probably need to look online at the blog to see the image

In these difficult times I thought it might be worth a caption competition.
Any suggestions? Perhaps “Airport proves traffic forecast doubters wrong?”. But I am sure you can do better. 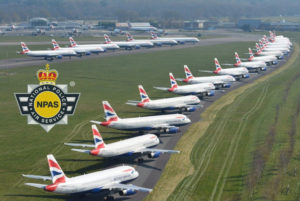 Just another typical winter day I guess. Winch launches to around 1600ft, with three knot thermals to 3000ft above the airfield. I do hope Spring and Summer are as good. Alastair

A very quiet day at the launchpoint and only 25 flights today. That did though allow concentrated instructional flying for those who had booked. The new booking system is giving much more satisfaction to both instructors and trainees.

Interesting day today. The sea air came in from the south meaning that we had to struggle away to the good conditions to the north. Problem was the snow showers developing over the mountains. A couple of images below of the highlands north of Crieff from just below the 7000ft cloudbase. 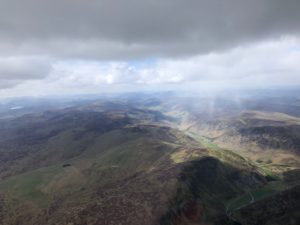 Sunday started with a thin layer of stratocumulus which as expected gradually broke up and it became soarable. All gliders flew, most using the west wind onto the Bishop and then transferring to thermals which went to about 5500ft. Of those I have spoken to, M3 found some wave to around 8000ft, but I think most of us flew around the area to the north and west in thermals of varying strength. Quite a lot of snow showers in the mountains though.

Expecting, dare I say it, a good thermal day tomorrow.

Image is the Bishop from the Lodges 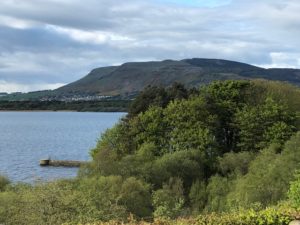 Rigging in full winter kit at Portmoak today .  Congratulations to Stuart on his Gold Height .

41 launches on a nice warm sunny day for a change and great flying conditions. I heard one report of a climb to 6000ft QNH.

I thought the booking system today was a great improvement on the old system, but members, don’t be afraid to book if you need two seater flying.

A cold dull start turned into a nice soaring afternoon. This is the first part of an aerotow taken from the back seat of the K21 on loan from Tim Dews.

Full winter kit today, but strong thermals to compensate until the inevitable showers came in.

EZE was derigged and returned to Tim Dews and we are now looking forward to rigging and flying his K21 at the weekend.

Some good soaring today and I expect Chris will put in a report on the flying later. Please note though that RASP is not working at the moment and if you look at it and it tells you the soaring is very bad, you could miss a good day

Yes, it was quite windy today with gusts showing 48kts. But it allowed more fettling of the club gliders and now LPM, JKW, FUY and KAN (front only at the moment, rear next repeater week) have S80s installed.

This run of weather means we have only flown on four Saturdays this year, but you have my word that the weather is changing now…….

No flying (again) today, so I sat in on Gordon McDonald’s Inspector Seminar that the BGA held at the club today. This was for me an interesting and informative session and something I think most glider owners would have learnt a lot from.

No flying today on a Wednesday for a change, but I have attached a couple of pictures of a parachute being inspected and repacked, in case you ever wonder what is inside the pack.

Lots of the usual glider maintenance and fettling in evidence as well.

Only two launches today due to low demand and an even lower cloud base until midday. But well worth the wait as the wind backed and increased with the ridge working well in 20/25kts of wind.